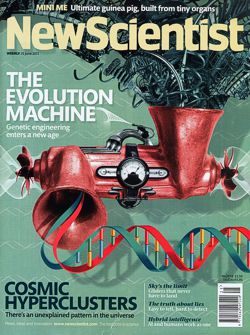 THIS WEEK'S NEW SCIENTIST MAGAZINE (25 Jun) highlights an article entitled The Evolution Machine in which the author, Jo Marchant, reports on a new machine that automates the process of genetic manipulation and selection, so that what took genetic engineers years to do by current methods will soon be taking only a few days using this new technology, and cost a lot less money in the process (the evolution machine, once in production, could cost just $90,000, which is small change for GE labs). This automated process is called multiplex automated genome engineering, or MAGE, a system being developed by George Church, a geneticist at the Harvard medical School in Boston.

Marchant then goes to describe in her article some of the new developments in genetic engineering that MAGE would help develop, such as the possibility of recreating a new form of DNA from scratch which could make the new organisms virus-resistant.

What is remarkable about this article is the way it only pays lip-service to safety issues, which isn't surprising as New Scientist is basically an science-industry portal, reflecting the views of their pay-masters. So while safety is mentioned, it is then bypassed with the sweeping statement: "There will have to be all kinds of safety checks and FDA approval and so forth… " — as if that has ever worked before with the GM industry. Remember, the FDA is the same organisation that okayed aspartame. And if there is a terrible mistake creating new forms of life?

"And if the worst came to the wost, biologists could create viruses capable of killing their errant organisms. Such viruses would not be able to infect normal cells."

That is pure science fiction! It all sounds so plausible, and yet scientists are not able to even protect hospital patients against simple bacteria or stop the AIDS virus. Nature is inherently unpredictable, and any scientist thinking that he or she can control a complex process is playing with fire. So far, GMO manipulation has had many unexpected results including horizontal gene transfer between unrelated species, and unexpected toxic effects of GMO food, and yet scientific hubris (encouraged by greed) still regards scientists as being in the driving seat, and genetic manipulation as an exact science with predictable consequences. This is a profitable lie.

But what was particularly amusing in this article was the author's assessment of genetic engineering so far:

"The first generation of engineered organisms has been a huge hit with farmers and manufacturers — if not consumers."

What an ridiculous statement! Farmers are actually committing suicide over GM crops, and agricultural land is being ruined by their toxic effects. GMO are contaminating our whole gene pool, and the genes are crossing between species in ways that the scientists never even imagined. Monsanto has become a byword for evil incarnate, and scientists that report adverse effects of GM food are thrown out of their jobs and the scientific community.

The fact is that most educated consumers tend to come down on the side of banning GMO products, which is why legislation has to be put in place, at least in the US, that allows GM food to go unlabeled. This way the consumer cannot choose to avoid consuming it. You don't need to hide GMOs in the food chain if GMO foods are a "huge hit" with consumers.

Genetic engineering is about money and profit — not about saving the Earth or increasing health. Anyone who thinks otherwise is either dangerously naive or employed directly or indirectly by the industry.

Marchant is living in la la land if she thinks that GMOs are a "huge hit", and it is this sort of self-congratulatory, rose-tinted, if-it-can-be-done-do-it approach to genetic engineering that is destroying a gene pool that has taken billions of years to harmonize. As Marchant writes, "Most biologists would probably agree that it is just a matter of time before we develop the technology needed to rewrite the DNA of living creatures at will. If Church succeeds, this future will happen faster than any imagined." So they are going ahead with their Frankenstein technology whether society likes it or not.

So now we have a machine that is going to vastly speed up this process of gene pool contamination, and the massive profits that come from gene patents is going to push this technology through despite potential dangers. How can an industry this potentially damaging basically be allowed to regulate itself, either by defining its own testing protocols or using its massive resources to lobby the politicians that could and should be putting brakes on a run-away commercial process that could potentially endanger the population? There are ALWAYS unexpected consequences when we tinker with complex systems such as those involved with the processes of life, so it is just a matter of time before we have our first major gene pool tragedy. And that tragedy could be with us for… well forever!