THERE IS AN EXCELLENT documentary called GASLAND by Josh Fox that you can see on Youtube below:

This documentary exposes the insanity of hydraulic fracturing or fracking is a process in which thousands of gallons of chemical laced water and sand are injected into natural gas wells to release natural gas. The result is large-scale contamination of the groundwater, water so contaminated that it can even become flammable! 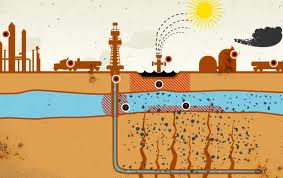 Of course the PR machine of the American Natural Gas Alliance (ANGA) has gone into overdrive in response to this documentary putting out a video (below) that basically claims that the Gasland documentary put out spurious information. They ended with the statement: "We can disagree on policies, but those disagreements should center around facts." Of course, they give no substantiation to their claim that Gasland is full of lies — this is slick PR at its most conniving.

It is amusing that this ANGA PR video states:

We have something special in this country: our people and our freedom to express our opinions and beliefs.

Well, ANGA have taken away that freedom to express opinions and beliefs about their fracking industry, and its devastating effect on the countryside and its people, by making sure that all comments under the video are reviewed before posting. As a consequence, their PR video has been viewed nearly 190,000 times but without a single comment approved underneath. That must be a whole lot of negative comments that have been censored out! And not only that, but ratings have been disabled for this video. I wonder why?

It is always dangerous for PR firms for large companies to use social media like Youtube and Facebook because they open themselves up to public scrutiny and comment, but by trying to have their cake and eat it — by having both a social media response and gagging/censorship to prevent comment on that response — those sorts of PR strategies can backfire, as they seem to have in this case with escalating resistance to the insanity of hydraulic fracturing.