WHY IS EVERYONE GETTING SO UPSET about a mosque being built near Ground Zero? Such emotions show ignorance about the events of 9-11, and the clear evidence that undeniably proves it was a staged inside-job. Today, there are organisations of professional scientists such as that there are now a growing numbers of professional scientists, architects and engineers sticking their necks out and demanding proper investigation.

You can hardly call it conspiracy theory when so many leading academics see major problems with the US government's official story.

Watch the documentary below if you want a taster of some of the evidence that does not fit the official picture.

The most likely alternative explanation to the official story that the heat from the collision fire brought down the steel-structured World Trade Center towers (something that has never happened to a steel building before in history, or since) is the "controlled demolition" hypothesis, which is nicely illustrated by the picture below taken shortly after the disaster. 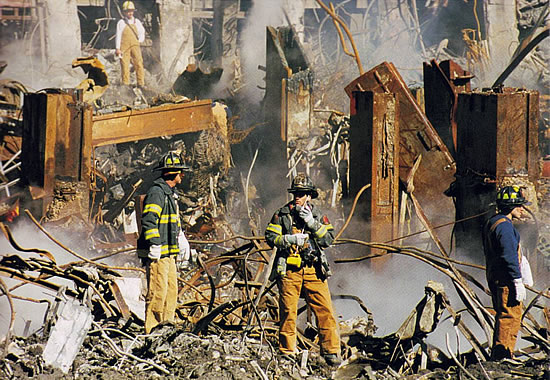 Notice the steel beams have been cut: look at the one in the top-middle of the picture behind the head of the central fireman — this looks identical to a classic diagonal cut made with thermite/thermate explosives used to bring down steel buildings. There is just no possible way for the weight of a collapsing building to cause that sort of damage. Just look at the molten steel that has dripped down from that cut!! Indeed, there is a peer-reviewed scientific paper now published that shows the presence of nano-thermite chips (see pic below) in the dust from Ground Zero: 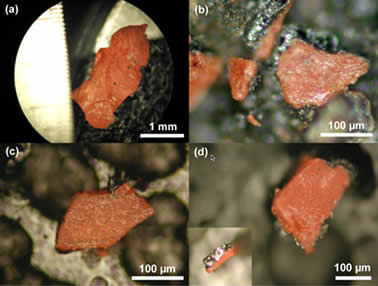 Thermite and thermate are incendiary/explosive compounds used in demolition because their extremely high temperature burn (>2,500°C) means they can cut through steel girders like a knife through butter, producing exactly the same clean cut that can be seen in the girders in the Ground Zero picture above.

Check out this video showing evidence of thermate use:

In the light of so much evidence in favour of the theory that these buildings were brought down by controlled demolition using thermate means that the 9-11 disaster was most probably an inside-job. But the only way to get access to those highly-secure World Trade Center buildings to rig them for demolition could only possibly be with the consent of their owner, Larry Silverstein, and with the quiet nod from the US secret services and ultimately the Bush government. But why would Silverstein let his own buildings be destroyed? What possible motivation could he have?

Apart from having a very close relationship with the State of Israel, which benefited immensely from the subsequent invasion of Iraq by US forces and the vilification of Islam and Arab nations (was 9-11 an Israeli false-flag operation?), Larry Silverstein made a killing on his insurance claim on the complex, the lease to which he originally bought for $3.2 billion in July 2001 ($50 million lower than the highest bidder at the time). By claiming in the courts that the attack on the World Trade Center constituted two acts of terrorism because two planes were involved, he managed to get a double payout on a proportion of his insurance, bringing the total payout to $4.55 billion. Not bad considering that he had only owned the World Trade Center lease for less than two months before the disaster. "Coincidently", he also spent months before the disaster reworking the insurance for the World Trade Center to include acts of terrorism.

The video below illustrates his possible complicity:

So the evidence clearly favours 9-11 being an inside job, but it is obviously not an explanation that patriotic Americans (the vast majority of Americans) can easily accept because it would mean that their own government conspired against them and was responsible for the murder of nearly 3000 American citizens. As a consequence, there is this astonishing level of denial going on, denial kept in place by blind patriotism.

It is ironic, therefore, that so many in America and around the world are getting heated over the building of a mosque two blocks away from Ground Zero. Sure, Moslem extremists are murderous people, just as Jewish and Christian extremists are, but opposing the building of this mosque, in a place that previously had a mosque, only shows a collective reluctance to examine the 9-11 evidence.

Building a mosque near Ground Zero does not dishonor the 3,000 Americans who were murdered in 2001. What dishonors them is for the government to keep ignoring requests for an official independent scientific investigation into the events of 9-11, an investigation that is likely to throw up some very uncomfortable truths for the American population.