"UNLESS YOU LIVE IN EUROPE, your last meal probably contained genetically modified ingredients… " so started a depressing article in New Scientist this month (July 10 edition) which describes the burgeoning research now going on to genetically modify animals. The article goes on to boast:

"Behind the scenes… a quiet revolution has been taking place. Thanks to a set of new tricks and tools, modifying animals is becoming a lot easier and more precise. That is not only going to transform research, it could also transform the meat and eggs you eat and the milk you drink."

I am not a Luddite, but I am someone who respects the wisdom of not tinkering with life systems that has taken billions of years to naturally develop. You have only to visit a natural environment to see the harmony of living organisms (apart from human beings of course). But modifying genes in both animals and plants using scientific knowledge that is still shrouded in ignorance and technology that relies on luck, in anyone's eyes, has to be sheer madness — a crime against humanity.

Those who are pro-GMO either have a financial interest, are expressing shallow opinion, or believe the lie that bioengineering is an exact science. But scientists, behind the scenes and away from the gaze of their corporate sponsors, do express concern over the introduction of biotechnology.

Look in the back of New Scientist and you will see adverts taken out by biotechnology companies, which explains this magazine's general pro-GMO stance, but even they published last month (Jun 19) a cover-page featured theme entitled: "THE UNKOWN GENOME" [see below], in which they outline in three article by different science writers, the rapid new changes that are currently taking place in our understanding of the genome. So for example, non-protein encoding genes are turning out to have functions in the body rather than being dismissed by scientists as "junk DNA". One author, Bijal Trivedi, even admits in the magazine that "… until we understand far more about the genome, even whole-genome sequencing will be of limited use." 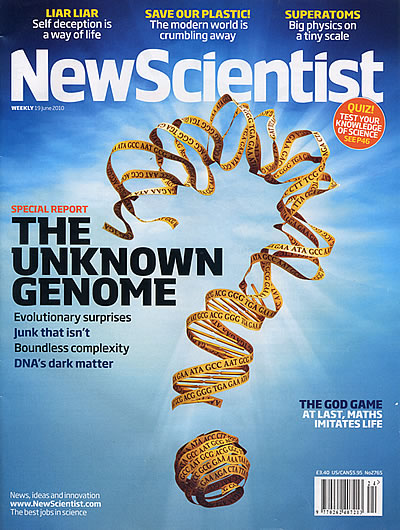 Michael Le Page's article in this edition of New Scientist quotes Dr. Ewan Birney of the European bioinformatics Institutes near Cambridge, UK, who is a part of a major project to uncover the workings of the genome, as saying, "It's very confusing and intimidating." Le Page then finishes his article with: "What's certain is that there is much more to discover. 'The genome is the start, not the end of the process,' says Birney."

So mainstream science admits ignorance regarding the structure and functioning of the genome, and yet, nobody mentioned the very obvious dangers implied by this ignorance associated with genetically modifying plants and animals. This is insanity. Until we fully understand the genome, surely it would be wise not to tinker with the genetic coding. Even the term "gene sequencing" is misleading as it implies that the genes function linearly and sequentially. They don't.

History contains many examples of instances where species from other parts of the world have been introduced into other ecosystems and have wrecked havoc (for example the deliberate introduction of cane toads in Australia). But what would it be like if a genetically modified organism (animal, plant or bacteria) behaves in some way unexpectedly. Can you recall it? No. The problem is self-replicating.

This can happen with new traditionally-derived hybrids of animals and plants, but nature puts in limitations so that there is just enough gene shuffling to drive some sort of constructive evolution, but not enough to cause serious gene toxicity. But literally shooting new strands of DNA (say from a fish) into thousands of target cells (for example from tomatoes) and seeing what, by chance, develops in a small percentage of them (yes, believe it or not this is primary high tech method used for creating GMOs) is most certainly in a different category altogether — the Frankenstein category.

So for the sake of the human race, why not put a moratorium on genetic engineering until we understand more about genes and how they function; until genetic engineering becomes more of an exact science (if that is ever possible in such a complex system). Surely that would be the wise thing to do? But this does not happen because we currently live in a society where the politicians we elect choose to do nothing to control how big business pursues profits, even when that activity poisons the integrity of the gene pool which cradles humanity and all other life on this beautiful planet.

New Scientist should be ashamed that it does not more directly address the very real and scientifically-valid dangers presented by genetic engineering. (That said, if it did, it would probably lose a significant percentage of its advertising revenue. It all comes back to money, which raises the question of how do we change a society which is profitably destructive?)